An Interview with Tyson Ritter: Growing Up An All-American Reject

With two fresh songs available on iTunes and an accompanying short film on Vevo, The All-American Rejects are back and positioned to take the alternative rock world by storm. By marrying provocative and compelling visual elements with a whole new sound The All-American Rejects are creating a uniquely electrifying sensory experience for their fans.

In 2002 the band enjoyed near immediate mainstream success when their self-titled debut album climbed the charts mere months after the boys graduated high school. From there, The All-American Rejects continued releasing popular, punk rock music. Their songs were party anthems, breakup chants, and pub-crawl playlists toppers.

Now a decade and a half later, after a five-year timeout from making music as a band, Tyson Ritter (lead vocals, bass), Nick Wheeler (lead guitar, vocals), Mike Kennerty (rhythm guitar, vocals), and Chris Gaylor (drums) are back with an explosive new sound and a refreshing outlook on creative collaboration. We caught up with Tyson Ritter to discuss the band’s music, their smokin’ hot short film, and what it was like growing up a reject.

The self-titled debut album served as the soundtrack to my sweetest, summer after high school memories. The album must bring back crazy memories for you too.

It was a wild summer. The summer of 2002 was surreal. We came out with a record and I just walked for graduation. It was a trip.

What was it like to be launched into superstardom as such a young kid?

The last thing you prepare for is your dreams to actually come true. It was the most surreal experience of my life to walk out of the high school world and into the rock and roll world. It was a rude awakening but I was ready. I was tired of being asleep.

The All-American Rejects are on the road this summer touring with Dashboard Confessional. That sentence makes me feel young again!

You’re like, “What year is this?” We’re really excited to be touring with Dashboard. Chris has been asking us to tour with them since 2003. We figured better late than never. It’s going to be wild. Rejects shows are big heavy rock shows. Afterwards Chris will lull everybody into a beautiful opiate of yesterday. I don’t want to say it’s going to be a nostalgia show but my goal is for everybody who comes out to feel like they’re a kid again. The All-American Rejects are ready to wake everyone up to some new music.

You are a married man for this tour.

I imagine it will be different than tours past. Will your wife (a singer and actress in her own right) be joining you and the guys on the road?

When I was a kid touring used to be so beautiful. The glory of it seemed like it held its truth, but we are traveling in a big motorhome with eight stinky dudes. I don’t know if my wife is too keen on the idea of touring. Even when I was younger, the show was the only thing that really mattered. There are always guys on the road that live the quintessential rock and roll life of backstage girls and all that stuff, but we have always been so focused on doing a good job live that we were put off by any courtships.

The band’s pop rock single “Sweat” was released along with the more electronic and somber sounding “Close Your Eyes” on 7.7.17. Any significance to the date?

It’s my brother’s birthday. I love that man more than anybody in the world. The three sevens, if you follow the Pixie’s “Monkey Gone To Heaven” rule than God is 7. If there was ever a day for The All American Rejects to put out a song and for there to be good will and reception, 7.7.17 would be the day.

The songs are incredible. I have been listening on repeat. My husband was not into the same music when he was 17 as I was. Last night I danced around the house with our newborn and felt like a teenager again!

That’s awesome! I’m really proud of these new songs. I’m glad you got a chance to check them out. It’s a new age for The Rejects.

Talk to me about the raspy sexy “Sweat” and how the concept for the totally in-your-face short film was conceived.

Our director Jamie Thraves is a really brilliant artist. I threw myself into acting the last five years and in doing so realized we have seen enough of the archetype of a music video with a guy lip-syncing and a band playing but not really playing. Jamie Thraves approached us with his idea, “I see you being a woman.” I said, “That sounds fun. I want to do that.” We created a character Betsy as the alter ego of a guy named Bob.

The All-American Rejects have grown up in front of the record button. We took a break and finally had time to really find ourselves. We want to show everybody what we’re made of as adults in this world, as artists who know themselves more than they used to. If you have grown up with The All-American Rejects, this music is for where you are now. It’s been five years of a long, baited-breath wait. We aren’t going back into the “Gives You Hell” era where we were in our mid-twenties to make a cute, fun video. This is a more serious offering for us. As a songwriter you are only as happy as the last thing you composed made you feel. This new music finally makes me content. All that matters as an artist is that you can sleep at night.

It’s a natural progression. Fans have heard your sound evolve with each album, but “Close Your Eyes” represents a significant departure from anything you have done before. What was the sonic inspiration for this song and for the album?

For the past records we worked with one producer and made them the fifth member of the band. Tim O’Hare, Greg Wells, Howard Benson, and Eric Valentine were all captains of the record they worked on. I was starving to work with people outside my world. Songwriters are only as great as the well they draw from. I wanted to dip my bucket into a pool of uncomfortability and draw something out that could yield evolution for us.

Nick moved to Nashville. I lived in L.A. We have never been so far apart but in that distance grew a freedom of individualism. I approached a couple of producers to do some writing with because I had never written with anybody except Rivers [Cuomo] from Weezer. I was nervous, but in that nervous vulnerability songs were birthed like “Close Your Eyes” with Benny Cassette. I said, “Hey man, send me any hip-hop tracks you have.” I found this track of his without any guitars and I wrote this song for it immediately by myself in my room. I took it back to Benny; we finished it together and flew the song as it was completed to Nick, my guitarist. It was very much a satellite construction. In doing it that way we each had space to create. That freedom helped us find the new voice of the band.

How are Mike and Chris involved in the conception phase of new music? Do they receive the finished pieces from you and Nick and then add their spin or is it one big collaborative effort?

This time we were all a part of a Jackson Pollock. I got the blues and the reds. Nick got the blacks and the greens. Mike and Chris got the yellows and the greys and all the beautiful accent colors that help bring out the foreground. It was, in a lot of ways, more collaborative than ever before because we weren’t on top of each other in the studio going, “No. No. No, man. You should play this, man. Play this.”

It’s been 5 years since Kids In The Street was released in 2012. I know you have been acting and had some solo music efforts. What drove you to finally saying, “I need to be with the guys again”?

We didn’t want to loosen our grip on the reality we created the last five years. Our fans are beautiful and we are very lucky but we toured 24 months for every record we put out. That’s eight years of solid roadwork. In giving every night like that you have to step back and let go in order to find yourself again.

Getting off the road helped us realize we wanted to make music again. For so long music and the road were entwined. It almost gave us a callous to wanting to continue because the road becomes very taxing. Many people don’t know we put Kids In The Street out because that record wasn’t commercial. For a lot of people we haven’t even been out there since 2009. The question of, “Are we going to continue doing this?” had to be answered by a song. When “Sweat” was sent around everybody perked up and was like, “Let’s get back to it.” It’s always been like that. The music has to do the work before we want to start doing it.

It was smelling salts for the vampire. We had been asleep for a hundred years and finally decided there was something worth waking up for.

How close is the album to completion?

I think we are going to keep dolling out songs. The visual for this record is going to continue to be cinematic and unpredictable along with when the music will be released. Right now we are putting two out with a few more in the rafters waiting to be released. What’s great about how easy it is to get a hold of music now is you can let it go whenever you want. We’re going to put this one out, start the movie, and continue to dose everybody into a stupor throughout the summer.

I like that. Do you have a favorite song to perform live?

I still think it is “It Ends Tonight.” It’s a beautiful moment when the crowd connects to that song because it’s the slowest one we have. You can hear people singing along. There’s something incredibly powerful about the invisible umbilical cord that lies between the band and the crowd. It is like having a child for a night. They have this beautiful life and at the very end when you send them off to live the rest of their lives you feel a connection. It’s a beautiful thing. That’s the reason we all still love playing music. The world is so turned against itself and in turmoil right now. All we can share without getting into some political or religious dogma is music. It’s the only thing we can agree upon anymore. Being an ambassador of that sentiment is the greatest thing. We are the luckiest people in the world to do what we do. 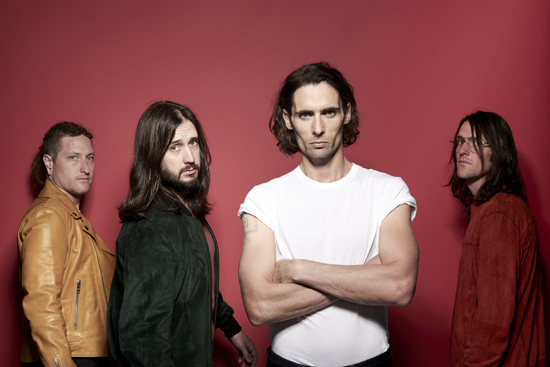