An Interview With Protest The Hero: Rody Walker On The Wild And Unconventional Pacific Myth Experience

Protest The Hero released their newest EP, Pacific Myth, to fans via the subscription-based Bandcamp service this November. The Canadian progressive metal band composed of Rody Walker (lead vocals), Luke Hoskin (lead guitar, piano), Tim Miller (rhythm, guitar, piano), Mike Ieradi (drums), and Cam McLellan (bass guitar) is set to finish the year back on their home turf in Canada with an exciting end of year tour before kicking off 2017 on the August Burns Red tour. Protest The Hero frontman Rody Walker talked to me about the unorthodox releases of the band’s last two albums as well as their attempt to change the surprisingly stale image of progressive metal. We also discussed why despite the ease and popularity of digital downloads, vinyl still reins king and wax is not only back, but getting bigger every day.

Congratulations on the release of your new album. I understand the Pacific Myth EP had an unconventional debut.

Why did you guys decide to go the nontraditional subscription-based route with Bandcamp?

When we were really young we always wanted to do something subscription-based. We wanted to do a vinyl of the month club but it was never feasible for us financially. It was costly to ship out vinyl every month, so we tried to figure out a way to do that without incurring a crazy cost. The idea was born of that.

It’s a really interesting time for the music industry because so many people are trying to circumnavigate the industry itself while still getting to listeners that there are tons of crazy weird, good ideas coming out. We are fortunate to be in a circumstance where we can take advantage of these ideas. That’s really what brought about the birth of that.

It makes more sense to do it at this stage of your career. Your fans are anxiously awaiting new music and following the band on social media.

There’s a built in fan base, which is fantastic because it gives us a little wiggle room to play around with some stuff.

How was the release order of the songs determined?

Initially it was just how they were written. We had two songs written so the third month we had to write and release whatever came out, which was interesting because if at the end of the month whatever we had was shitty that was too bad for us. We had to release it anyway. There were two initially done and then it was one a month for the next four months.

What did the writing and recording process for the album look like?

It was weird. It was a little stressful. I had to wait for them to have all the instrumentals done and then they would send them to me and I had a couple of days to just write overtop of it and then I had to run into Toronto and record the vocals and then three days after that it was released. It was a really quick turn around time and it was kind of stressful but I don’t regret it in any way. It was a lot of fun.

Do you think you will ever do something like that again?

Yeah. It was cool. It was a fun experiment and I really enjoyed it. We have our fans to thank for making us capable of doing something like that, but it doesn’t grow the fan base at all. It keeps it exclusive to the people that are already around. As much as it’s nice to give fans a treat it is a business and we are trying to grow. I don’t know that we would do that again, but it was a tremendous amount of fun.

For your band does the process always start with music or do you ever start with lyrics and then have band write accompanying music?

I always have a stockpile of lyrics and rough ideas in little books or notepads. Typically the band will send me the music and I’ll flip through those books and go, “Which of these ideas is shit and which are worth developing?” I’ll develop the idea from there, but it’s always music first and then I’ll try to figure out what to sing about overtop of it.

Pacific Myth is not Protest The Hero’s first time going rogue. Your previous album, Volition, was the result of a massive crowd funding effort through Indiegogo. Talk to me about the band’s departure from record labels and the motivation behind getting fans involved in the album experience from conception to completion.

We reached a strange point in our career where things felt stagnant. After our third record it felt like some people who listened to us were no longer interested, which is completely natural and we thought, “We don’t have any record label contracts anymore. Why not give it a shot?” The outpouring was really overwhelming. We never expected to have that kind of reaction. It was a kick in the pants that we certainly needed and it got us off our asses. Now here we are several years later still hauling away. Hopefully we can continue on until we’re old.

Don’t use the old word! Digital downloads are the way the world consumes music, but many people, myself included, collect vinyl in a desperate attempt to gain a more authentic listening experience. Listening to the songs in the order an artist intends for them to be heard while enjoying the cover art and lyrics sleeve visuals is a crucial to understanding the music. Each song on Pacific Myth boasts a unique piece of accompanying artwork. How do the artworks tie into the songs and the album as a whole?

Initially I was writing based on the idea of the hero’s quest but I wanted to do it in a very general way. I picked a pretty cliché roughed out thing, which is water imagery. When you pick such a broad topic it opens you up to a wide variety of different art. Luke [Hoskin] found several pieces, the one with the shark and the one with the lion, and we were very interested. It matched thematically and was also kind of stunning.

We called up Jeff Jordan who we had been working with for the past couple of albums and asked him if he was interested in contributing imagery and he did. He is an amazing artist. It really started coming together with the release of “Caravan” which is the last track. He really captured the message portrayed throughout the concept on it.

The big reveal is that this concept is not really a concept at all but it’s more of a criticism on the current state of conceptual art within the parameters of progressive metal. He did a really good job at creating this bizarre image of a fish turning into camel going up into the sky and turning into a cloud. We had great discussions with him about how it should be and I’m really happy with how the work came out. It’s well beyond what I could even dream of.

They remind me of those posters from when we were younger with the sky, earth, water, and underwater scenes all in one. Like the imagery for the songs on Pacific Myth, those were so detailed and saturated with color.

The heavy metal world is too obsessed with darkness. It’s artwork. It’s supposed to be colorful and elicit some kind of emotion. We’ve always thought album art should be colorful and exciting. So many people have like a blindfolded person in front of a black backdrop.

It’s got to be something people reach for on their shelves. I feel more engaged with the music if I have clear imagery in my head and in my hand.

Absolutely. As you said earlier, vinyl is really one of the only physical ways people consume music these days. Part of what makes it so valuable to me and I imagine many other people that you get this huge piece of artwork with it. It becomes something you can put on the wall and enjoy in more ways than one. It’s pretty cool.

You guys are closing out 2016 with a headlining tour in Canada before kicking off 2017 stateside for the August Burns Red tour. What are you most looking forward to about any of your upcoming shows?

We have the band Cyclamen joining us for the Canadian tour. They brought us to Japan recently and now we are kind of repaying the favor. I’m excited to see those guys on my home turf and see how they deal with a horrible Canadian winter.

I’m also excited about the August Burns Red tour because it’s been a long time since we haven’t headlined. For those guys to give us a shot, bring us along, and let us open up for them is really something that I’m looking forward to doing partially because I don’t have to play for an hour-plus every night, which is really taxing. On top of that Josh Scogin from The ‘68 is going to be there. We toured with his other band The Chariot years ago and I fucking love that guy. He’s the funniest person I’ve ever met in my life. I can’t wait to have a couple of laughs with him.

What was the first concert you ever went to?

The first concert I ever went to is going to make me sound really stupid. In ’99 I went to see Silverchair, Blink-182, and Fenix TX.

I think we all did.

It was at Maple Leaf Gardens, which is a legendary hockey arena in Toronto. I’m a huge fan of the Toronto Maple Leafs and to see my first concert there was pretty cool. Despite the fact that I don’t really like those bands anymore I got to experience my first concert in a place that is iconic. It’s where fucking Johnny Cash proposed to June Carter for the final successful time. This legendary place is now a fucking grocery store.

Is that where you grocery shop?

No. I live outside of town and rarely come into Toronto. I hate big cities.

Last one. Do you have any pre show rituals or tour superstitions?

We’re not a very superstitious band, but we do make sure there’s enough beer for everybody to have four or five before we go on stage. If you just cracked a beer and have to go out it’s like, “I don’t feel right. I haven’t done my routine yet!” As silly as that is, I guess it is somewhat superstitious and ritualistic.

Catch Protest The Hero at the Theater Of The Living Arts in Philadelphia on Jan. 4, the PlayStation Theater in New York City on Jan. 6, and the Starland Ballroom in Sayreville on Feb. 11. Their newest EP, Pacific Myth, is available now. For more information, go to protestthehero.ca. 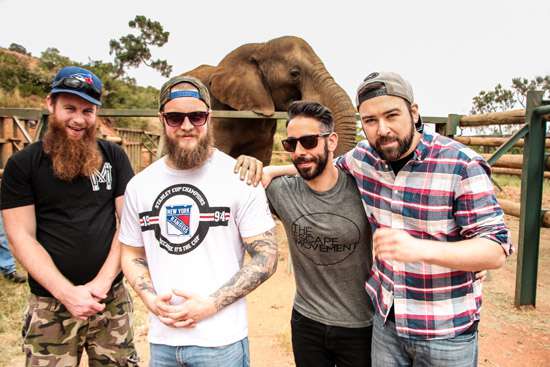