The ethereal Kelsey Lu kicked things off before Grimes, a colorful combination of Gwen Stefani, Fergie, and Jem And The Holograms took the stage. With in-your-face style and an upbeat, eclectic sound, Grimes delivered an energetic set of fun power pop anthems.

The arena lights went down, the stage was dramatically lit and like an otherworldly vision, Florence appeared. She walked barefoot through the front row passing flowers to her fans before taking the stage for an incredible, emotion packed, gut-wrenching performance, which rocked me to my core.

“What The Water Gave Me” opened the set as Florence’s voice boomed over the arena. “Ship To Wreck,” the first song off the band’s new album, How Big, How Blue, How Beautiful, was followed by Lungs hit “Rabbit Heart (Raise It Up)” during which Florence frantically darted to the back of venue to jump on an enormous speaker.

Florence asked the audience to serve as her choir and while she played conductor through “Shake It Out” from Ceremonials. Up next “Delilah” off the latest album pounded as Florence sprinted around the stage before collapsing in a heap. Like a phoenix, she rose with a vengeance as a calm descended over the crowd. The elegance and sincerity of a nearly motionless performance of Calvin Harris’ “Sweet Nothing,” after the havoc-wreaked moments earlier, was stunning in its simplicity.

Florence reminded us that goodness and wonder are always waiting to be discovered. “The answer is all in looking up and out,” Florence proclaimed while gesturing towards the roaring crowd piled into the Barclays Center. Fans bounced balloons throughout the arena while “How Big, How Blue, How Beautiful,” the title-track of the new album, was performed in near blackness. Florence finished the song smiling and said, “It is so beautiful! Thank you so much.”

“Cosmic Love” off Lungs was followed by three songs off How Big, How Blue, How Beautiful. Florence sang “Various Storms & Saints” with eyes closed before ripping into “Queen Of Peace” and the edgy, sultry “Mother.”

During a gorgeous rendition of “Spectrum” off Ceremonials, the powerhouse paid tribute to the victims of Orlando with an LGBT pride flag waving high over her head. The crowd roared approval as chills shot down my spine. “I see so much love and from what I can see New York—you have a lot to give,” Florence beamed as she opened “You’ve Got The Love.” Fan favorite “Dog Days Are Over” closed the set to a sea of dancing mayhem.

“What A Man” kicked off the encore as Florence dolled out appreciative hugs to the front row. The show closed with “Drumming Song” where Florence theatrically burned the last reserves of her boundless energy. When she grabbed her heart my own nearly burst out my chest in time with the rhythm. And then as if it was only a dream, the show was over. 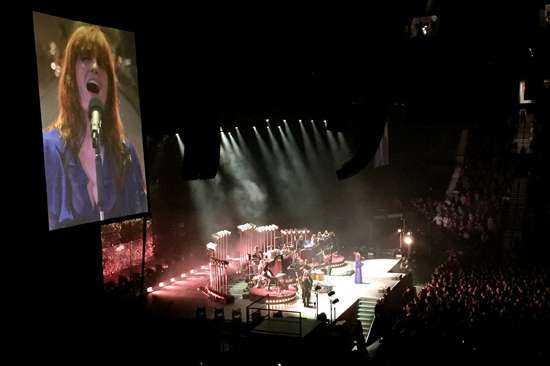