HOPE, NJ—Slowly sipping a hot cup of green tea at the Fireside Tavern in the historic Inn at Millrace Pond in Hope, NJ, I watched Gina Royale and her entourage of family and friends pour in, and then set up a no-frills keyboard, amp, and microphone for an intimate evening. With her eyeliner winged and her inky raven hair pulled back into a ponytail, Gina punched out the opening notes of “Back To Black.” I was anxious to hear if Royale had the voice or grit to cover the legendary Amy Winehouse. She opened her mouth and unhurriedly sang the song to absolute perfection. I put down my tea and tuned in.

As a college freshman, Gina is already light years further along in her maturity than I am in the dawn of my thirties. Her captivating stage presence radiates a sexy confidence and just a few songs into her set Gina’s timeless voice had me hooked.

Throughout the evening, Royale performed a mix of original songs and revamped covers of classic and current favorites. She playfully manipulated the speed and changed the cadence of popular songs to make them entirely her own. Covers of “Lips Are Movin,” (Meghan Trainor) “You’re Gonna Miss Me When I’m Gone,” (LuLu and the Lampshades) “Shake It Off,” (Taylor Swift) “Ain’t It Fun,” (Paramore) “Heartbreak Warfare,” (John Mayor) “Both Sides,” (Joni Mitchell) “Radioactive,” (Imagine Dragons) “Love Somebody,” (Maroon 5) and her favorite song “Imagine” (John Lennon) celebrated Royale’s vocal range and eclectic taste.

Gina proudly performed nearly every song off her emotionally-charged original debut album, Heir, including “Hello Heartbreak,” “I Don’t Need You,” and “Whiskey,” as well as “Tightrope,” which she wrote at just 14 years old. In her songs “Skin and Bones” and “Come Home,” Royale tackles themes of body image, self-esteem and family with bravery and poise. Finally, toward the end of the evening, Gina performed “Walk Without Gravity” with unabashed passion and reckless abandon.

Royale’s second album, Brainwaves, due out later this year, boasts an underlying theme of independence. The bold and unapologetic “Mean Song,” “Battle Cry” and “Let’s Just Kiss” each serve as anthems of empowerment.

Perhaps even more captivating than her voice is Gina’s sweet demeanor. She wrote and recorded the title song of her upcoming album, “Brainwaves,” on the ukulele. The song was written “as a reminder that even in the worst times there are still butterflies and all that crap,” Gina says with a giggle. 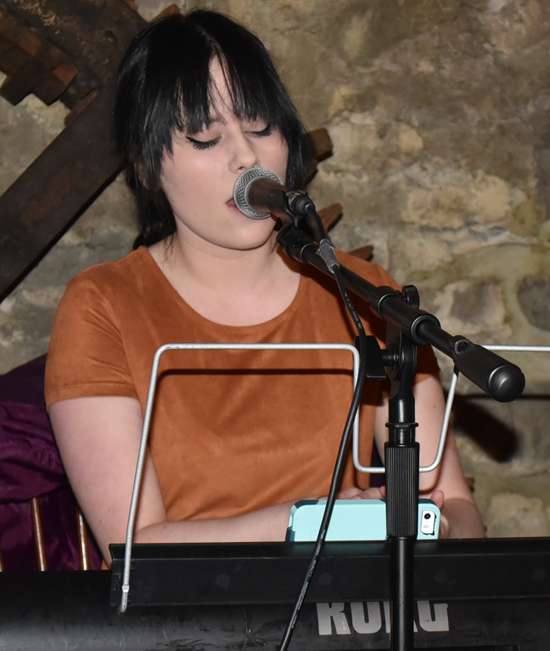