George Thorogood and The Destroyers have been rockin’ and rollin’ for 43 years running. With their unmistakable blues-rock sound, irreverent high-energy stage act, and consistent nonstop tour schedule, The Destroyers have amassed a tremendous following of die-hard fans who flock year after year to sold-out venues to watch the band boogie down over and over again.

This September the band—George Thorogood (vocals), Jeff Simon (drums), Bill Blough (bass guitar), Jim Suhler (rhythm guitar) and Buddy Leach (saxophone)—kick off the second leg of their Badder Than Ever Tour. During a very short break in the band’s 32-city U.S. and Canada tour I caught up with Jeff Simon to discuss his favorite on stage moments, his memories of growing up with the man he calls GT, and his experience “keeping time” for The Destroyers.

Rock and roll is your full-time job. You have played drums for George Thorogood and The Destroyers for over four decades. To what do you credit your continued success?

I can’t explain how we’ve been able to do it for so long. We’re just really fortunate.

In 1973 your van and your drum skills helped birth one of the most legendary bands in music history. What was it like to grow up, work, and travel the world with your friend George Thorogood?

George is three years older than me, so we didn’t really go to school together. My older brother is four years older. He went to school with George. We all grew up together. I’ve known him since I was nine years old. When we were kids we played baseball all day and then dissect Rolling Stones’ records at night. My brother would buy the records. He had a job. He was a big influence on me. He would be the first kid on the block with the records. George spent a lot of time at our house and we would just talk about music. “Why did he do this?” “Why did he have a cymbal crash here?” It was a music education for me. That’s what we did when we were kids.

George had a charisma. Even when we were kids I could see there was something special about him. Something good was going to happen with him. It was my brother’s idea to get a drum kit. We got a drum kit and taught ourselves how to play along with the records. My parents had the patience for that. If my kids were playing drums in the next room I don’t know how much patience I would have, but they never said anything. My brother was in a couple of bands and they would always practice in the basement. There were neighborhood kids coming in and there was always music and loud stuff going on. My folks never said anything. They always encouraged it. I think that’s unique!

The Destroyers have performed over 8,000 live shows and toured with some of the biggest names in the industry from Muddy Waters to Howlin’ Wolf, and the Rolling Stones. Do any experiences stand out as one of those, “I can’t believe this is freakin’ happening!” moments?

George and I moved to Boston in ’74 or ’75 and we worked mostly in New England. That’s where we opened for Howlin’ Wolf, Muddy Waters, Hound Dog Taylor and the HouseRockers, and a few others. We spent a lot of time with Hound Dog Taylor. They kind of adopted us. We learned a lot about life from those guys. That’s really special to me. Opening for the Rolling Stones and the magnitude of those shows, playing for 100,000 people sometimes, that’s a unique situation! And then we’re playing with Charlie Watts. That was my guy. That was my hero. That’s who I patterned my whole drumming approach after. We got to meet the guys and I was kind of apprehensive because what if he’s a jerk? But man he was really nice to me. I spent as much time with him as I possibly could, which wasn’t a lot, but any chance I could I would just show up and be there.

I’ll tell you about the way we got into that. George went to our booking agent and said, “The Rolling Stones are starting their tour in Philadelphia. If you don’t get us on one of the shows, you’re fired.” He was half joking. Bill Graham was the promoter and he said, “We’ll put you on the first couple of shows and see how it goes.” We did the first show and it went so well he said, “You can do the whole tour.” The 50/50 Tour [all 50 states in 50 consecutive days] was already booked when we did this Stones’ show, so we couldn’t. We were like, “We have this thing booked. We can’t do it.” One of the shows on the 50/50 Tour… we played with them in New Orleans. We ended up doing 16 shows with them in America in 1981 and nine shows with them in Europe in 1982. That was really special.

After the first show in Philadelphia the piano player, Ian Stewart, came to me, sat down and said, “Those Chuck Berry songs you’re playing… what keys are those in?” I told him and he goes, “Well do you think I might have a play?” I said, “Ian, are you kidding me? You’re one of our heroes!” Every show after that he played with us and then when we recorded Bad To The Bone, Ian came and played on it and then did the tour in Canada with us. We got to know Ian a little bit. That was nice. Then on one of the breaks in Rotterdam we booked a gig for ourselves and took Ian and Bobby Keys who played sax from the Stones’ camp to play with us. We were in the second or third set of the night and Mick shows up and sings a couple of Chuck Berry songs. It was over after that. You can’t follow that.

Recording, performing and distributing music has completely evolved in the last forty years. It is easier than ever for people to share and access different kinds of music, but there is still so much technology cannot replace. What is your take on that?

There’s good and bad or positive and negative to both. How it affected us personally? Our records sold in a steady stream all along the way. We never really had a hit record or sold millions and millions of records all at once. We had a steady stream and pretty decent sales. When digital sharing came in that income went away because everybody is just taking it, taking it, taking it. That’s the direct effect I have witnessed. But being able to share music with people and the way things are set up now with Spotify and Pandora, even though they’re not paying people fairly, it’s a way to find new music. I’ve gone on there and I’m like, “Wow. Where did that song come from?” There’s so much more available now. All the stuff from the ’40s, the ’50s and even the ’30s is available again. You wouldn’t have been able to access it or find it, but now all that stuff is available. I think that’s a positive. That’s what I do. I spend a lot of time trying to find old recordings I haven’t heard. A whole world opened up by digitizing stuff.

You guys have been relentlessly touring Badder Than Ever and consistently playing to sold-out venues. How does it feel to know fans are just as passionate about your music as they were 40 years ago?

Our crowds are getting older as we’re getting older! We see younger kids at the shows still. I think some of our gang is bringing their kids and I think some of the kids are doing what we were just talking about: finding stuff. Good or bad, love it or hate it, classic rock radio… we got our foot in the door there and it has kept us going for a long time. We have a fairly high-energy act so we get a lot of energy from the crowd. That hasn’t changed. We still get great energy. I’m looking over my shoulder waiting for somebody to catch us getting away with what we’re doing. The people that like our music are still showing up. It amazes me to this day.

There are countless photos of the band with fans on your social media sites. It’s incredible to see how appreciative The Destroyers are of the people that come out to the shows and continue to buy the music.

If nobody shows up then no body is going to hire you. They’re responsible. It’s a team. Teamwork. The team.

Speaking of your team, with songs like “Bad To The Bone” and “Move It On Over,” The Destroyers have made an entire career out of serving up a playful, tongue-in-cheek badass attitude. Who in the band is actually the biggest rebel?

It’s like being an actor in a movie. That character doesn’t necessarily mean that’s the way you are as a person. But let’s see, a rebel? Do we have a rebel in our troops?

Me?! No. No. No. It’s funny because I don’t mind being able to just walk around without anybody having any idea who I am or what I do. GT is the front guy. He is the voice and he is good at it. God bless him. It’s a whole different thing. I would hate to disappoint you, but we’re pretty regular guys. If you’re looking for wild rock and roll stories and drugs and sex and all that, that doesn’t really apply to us.

Your Simon Says videos on YouTube are hilarious, especially the “Late Night Bling” one. Where did you come up with that idea and how do you decide what you’re going to do next?

We’ve got a pretty good brain trust working with us. We’re always throwing out different ideas and trying different things. Our manager Adam Conde has some really good ideas. Shawn Berman, who is our monitor engineer on the road and engineered our last two records, does all that video, editing, and recording work. He’s just brilliant at that. The specific idea is probably Adam’s, but I’m not positive.

The Destroyers are touring more than ever before. Do you guys have plans of slowing down or can we continue rocking with you for a long time to come?

I haven’t heard anybody mention the R word in a while. We’re still really having a lot of fun playing. I’m probably having more fun playing than I ever have. There’s baggage that goes along with any occupation. When people ask me, “Are you going to retire?” I say, “Nah. The baggage gets a little heavier, but I can still lift it.” I can’t imagine what I would retire to. I don’t know if joy is the right word, but the feeling you get playing music… as long as people will show up and allow me to participate and experience that I can’t imagine ever wanting to retire.

George Thorogood and The Destroyers will play the Mayo Performing Arts Center in Morristown, NJ on Sept. 28 and The Paramount in Huntington, NY on Sept. 29. For more information, go to georgethorogood.com. 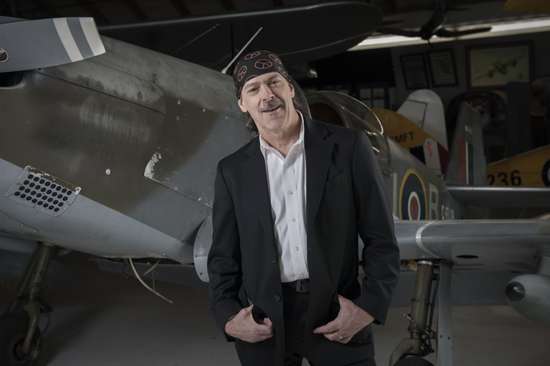