An Interview With Poison: Rikki Rockett On Poison’s Upcoming Tour And On Looking At Life Through A New Lens

After nearly 10 years, the explosive rock band Poison is set to headline a tour through the United States and Canada. The upcoming shows will celebrate Poison’s greatest hits and fan favorites including “Every Rose Has Its Thorn,” “Talk Dirty To Me,” “Nothin’ But A Good Time,” “Something To Believe In,” and “Unskinny Bop.” With seven studio, four live, and five compilation albums to their name, Poison has amassed an enormous following of die-hard fans.

Since Look What The Cat Dragged In debuted in 1986, Poison has survived numerous lineup changes, but for the upcoming tour all four original band members—Bret Michaels (lead vocals, rhythm guitar), Bobby Dall (bass guitar), Rikki Rockett (drums), and CC DeVille (lead guitar)—are back together for what promises to be one of Poison’s hottest tours ever! The iconic former hair band is also scheduled to simultaneously co-headline a tour with Def Leppard and special guest Tesla starting this spring.

Drummer for the multi-platinum album band, Rikki Rockett, spoke with me about the upcoming Poison tours, his experience beating oral cancer, the inspiration behind his company Fallen Angels Customs, and details about his exciting summer project with Ducati and Leica.

You, Bret, Bobby, and CC are set to kick off your first headlining tour in over 10 years. What are you most looking forward to about getting back on stage and rocking with your crew for a headline gig?

I don’t know if it has been 10 years exactly but it has been a hot minute that’s for sure. I am looking forward to having a little more time to play the songs we ordinarily don’t get the chance to play. The conundrum you have as a band that has several records and has been around for a while is that fans want deep tracks and you want to play deep tracks but then you also have a chunk of fans that want the hits. Thank God we have enough hits to fill a time slot, but it also makes the situation where it’s like what do you throw in? You have to get those songs in so it makes it challenging. When we headline we have more time up there so we can play more songs. I’m looking forward to playing “Cry Tough” and things we don’t ordinarily get to.

The tour is a celebration of Poison’s greatest hits, some of which are now over 30 years old. How does the experience of performing the songs, which launched you guys into superstardom, today compare with what it was like playing them when they were originally released?

We make less mistakes now! Ha! Sometimes we go on stage and still feel like we have to take over, like the audience doesn’t know the song and we have to kick them in the ass with it! But they do know it. I hate to use this word, but these are kind of legacy songs. We can pretty much pick anything at least from the first three records and people know those songs. We come from a period where it wasn’t just a song somebody would listen to. They would listen to the whole record. That was so awesome. People sit in their cars and they don’t just listen to “Unskinny Bop” or “Talk Dirty To Me,” they listen to the whole album.

While you are on stage keeping beat for the band’s most beloved songs, I imagine it feels as if you are traveling back in time. Do any songs in particular trigger more powerful memories or transport you to the heydays of the bands’ skyrocket to fame?

“Cry Tough.” That was our very first single and it wasn’t a very successful one. The song got more popular after the band broke. It reminds me of the struggle when we just really couldn’t get much traction. We wrote that song when we were living in downtown L.A. in a pretty nasty section. It’s definitely a big one for us.

Is there any tour, individual show or moment from all your years playing with Poison where everything fell in line and the stars felt right?

Definitely. I grew up seeing bands at the Spectrum in Philadelphia. When we first headlined the Spectrum that was a very special time. Our tour manager said, “When the lights go down it doesn’t look like any other stadium in the world. Anybody that ever meant anything to you is out there.”

Yeah! It was awesome. My graduating class came out and videotaped me. I couldn’t make it to the class reunion because I was on tour. What better reason to not make it? That was a special one for me.

Last July you announced via Instagram that after a one-year battle you were cancer free. This month marks one year since you started an experimental clinical trial for immunotherapy at UCSD Moore’s Cancer Center with Dr. Cohen and Dr. Patel. What does it feels like to be on the other side of cancer?

It’s a mixed feeling. The main thing is thankfulness. I am more thankful than you could ever imagine. But then you get moments, I don’t want to say of depression, but I did lose a year of my life. That kind of sucks but I didn’t lose my life so then I sit there and I go, “Well I am happy about that.” Then I go, “But I missed some of my kids growing up,” but now I get to see my kids growing up. There are all these crazy mixed emotions, but logically and non-emotionally I am ridiculously thankful. I was right there on the edge. It could have gone either way.

Poison shows are notoriously high energy and drums are physically demanding. After defeating cancer how did you get back in fighting form? What did you do to mentally and physically prepare to tour?

I have been working out as best as I can while balancing all the other things in my life. Drumming is what they call a sport specific exercise. There are some things you just have to do. You can workout a million different ways and it all helps but you really have to sit at the kit and play for it to come together and make sense. That’s what we have been doing for the past couple of weeks, just hammering it out in rehearsal. That’s the best preparation because rehearsal is harder than the show. The show is only however many minutes. Rehearsal is eight hours.

Can you talk to me about Fallen Angel Customs? What inspired you to start the company and how involved are you in each step of the process?

When I was right in the middle of the cancer stuff my girlfriend and I kept fantasizing about riding the bike and travelling and do all the things we did before that I didn’t feel good enough to do. She is really great at graphics and I am pretty good. We put our minds together and started to come up with designs and ideas and we decided to launch it. What’s really great is actually getting out now that I am better.

It must be incredible to rock the gear and get out there with your girl. Everything came full circle.

Just on time to tour! I have another project I am working on, which I am going to announce first to The Aquarian Weekly. Ducati is hooking me up with a Scrambler motorcycle and Leica gave me a Leica Q camera to take on the road this summer. I am going to shoot photos from the seat of my motorcycle. I have to stay on the bike and shoot all the photos. I want to do a show at the end of the tour with those photographs. Hopefully they turn out good and people will buy them. I am going to donate the money to UCSD Moore’s Cancer Center.

What a great idea! I can’t wait to see how the photos turn out.

I am taking two cameras but the Q will probably be my go to because it is light and it autofocuses. I will probably videotape myself modifying the bike with one of the zoom cameras and maybe the Leica as well and put that up on social media. It will be fun. There will be plenty to do out there. It will keep me out of trouble.

The tour, the kids and everything else you have going on isn’t enough to keep you out of trouble?

I wish I could bring the kids with me, but they are in school and mama wants them home. I am going to do my best to get them to come out for a little while. Jude is a little older and would really enjoy it. He hasn’t been on a tour bus since he was two.

Poison fans are excited to watch their favorite rockers perform the greatest hits. Are there plans to work on new material or release another album in the near future?

There aren’t any immediate plans right now, but I would love that of course. I am always the guy that wants to get in the studio. I have a studio at home. I would be the last person anyone would have to talk into doing it, but at this point there aren’t any plans. 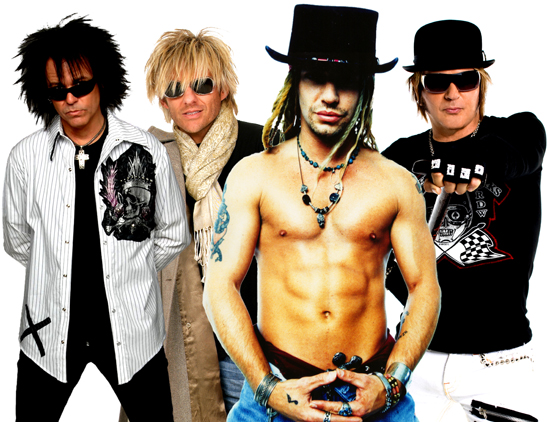