The Man Behind The Music: An Interview with Citizen Cope

Clarence Greenwood, more popularly known as Citizen Cope, is one of those rare, successful musicians who somehow escapes the nauseating overexposure which accompanies many of today’s pop artists. Because he doesn’t give many interviews or share personal information on social media, Citizen Cope maintains an air of mystery. In a world saturated with overhyped superstars, Citizen Cope has managed to separate himself from the herd. Greenwood is not a celebrity, but an artist.

It is near impossible to assign the music of Citizen Cope to a specific genre. An eclectic mix of rock, blues, hip-hop, and folk influences fuse together to form a totally unique, soulful sound. With six albums under his belt and the Rainwater Recording record label to his name, Citizen Cope has victoriously created an entirely new genre of music.

In speaking with the man behind the music, I discovered Greenwood to be in complete control of his sound and his message. He has a deep comprehension of his power and responsibility as an artist. Despite a nonstop tour schedule, Greenwood took time to speak with me about his upcoming shows, writing process, and involvement with Turnaround Arts.

Your music is soulful, raw, and has an undone sound. Are the solo acoustic shows the most pure way for listeners to connect with your music? What inspired those shows?

I’ve done them over the years. I even started out doing them. That’s how I started performing live, even before I had a band. I always loved the idea of making records and producing as well. My records kind of took their own life. Me sitting in a room, writing the songs has its own life. And I think they’re just kind of different. You know? I feel like I can get to that intimate place, and more lyrically based, very spiritual place when I play them by myself.

A lot of your lyrics sound like poetry. Are you influenced by any poets or authors?

Not really. I was kind of misdiagnosed with, I didn’t really comprehend what I was reading when I was a child. So I was never a big reader. There was a poem call The Land of Counterpane that I memorized when I was a child. My mother had me memorize. It was by Robert Louis Stevenson. Also some Edgar Allan Poe. “Two roads diverged…” Do you know that poem?

That poem. But I just had, I think, some kind of innate ability to put life into words and it wasn’t something that I studied. It was something that more kind of came to me in a real natural way. I just use references of life and sometimes I use biblical references, just because they’re a point of understanding, or analogies and things like that go in because it gives people a point of reference. I don’t know how, but I became a decent writer. You know? I could write.

When you are writing your songs, do you typically start with lyrics and then create a melody to back it? Or do you hear a melody in your head and then write lyrics over the melody?

I usually don’t start with poems. I’ve very rarely done that even though I write my own poems now and have written poems in the past. But when I write a song it’s usually with the guitar in my hand and it kind of, the rhythm takes to the melody and to the lyrics. And sometimes I’ll have a chorus done and not have the verses. But I can’t even explain the process…

So they happen together?

Well, I mean I start with the guitar and the melody kind of comes and then the words as well. Sometimes I’ll have a word idea and put it to a melody. But I’ve tried all different ways. With “Hurricane Waters” I did all the music and had the chorus, but I didn’t have the verses until later. I kind of used a poem I had been working on with that for the verses. But usually that’s not the case. It usually kind of starts with a guitar and vocals and melody and then the lyrics come in there. And you know, I don’t just throw lyrics around. So that’s usually one of the final things that is finished in the song.

You are so identifiably yourself. How do you manage to stay grounded, connected to your spirit and message, and stay true to your voice?

I think that’s just what got me there. You know? I kind of wanted to get there on my own. On my own terms. And over the years, it wasn’t easy at first. I mean my stuff doesn’t sound like other people. And I think as far as radio and advertisers and all these other things, they want to grip onto something that sounds something like something else. That’s been a difficult road because it’s not something that, “Okay, this is like this song.”

I just saw so many artists over the years have big radio songs or become popular and the media jump all over them, and the New York Times do big pieces on them and then they just kind of disappear, because it wasn’t something grounded in something real. Being around this long I can see the compounded effect of all the songs. The fact that I haven’t done it creates longevity and an intimate experience, and a truth for me, and hopefully that goes on to the listener and I think it has.

‘Cause I can still do shows and I don’t have radio hits or big radio budgets or any kind of big press. It’s something that kind of happened word of mouth and the people got into the music. A couple of lucky things along the way, a couple of licenses, and it just allowed people to listen to the whole thing. Me playing live a lot has exposed people to it. Seeing that I can get up with a guitar and kind of be in trance myself and do that. I don’t necessarily consider myself to be a proficient guitar player or having a superior voice or have any kind of exemplary stage presence. I just get into the song and that’s been enough for my people and for me.

It’s just something sacred that I didn’t really want to try to degrade by doing what would be considered straying. I always want to push myself as an artist and I think there is other points of my life that… Obviously I can’t write the same song that I wrote on my first record because spiritually I might not feel that way. You know? So you try, where ever your spirit is evolving to, or wherever your humanity is, you kind of follow that lead. And I’ve just been blessed to do something I love and find something I love and I continue doing it.

You’re paying it forward now. A portion of every ticket sale for your upcoming show is going towards buying musical instruments for students at Red Lake Middle School. Can you tell me how you became involved with Turnaround Arts?

I was in Montana and they asked me would I host some students from the Indian reservation there, which is the Laying Deer Middle School. Laying Deer is a reservation in Montana. I was excited and they asked me to a sweat lodge. I went to the reservation and did a sweat lodge. I had a chef at the time so I had the students come down and eat with us before sound check. You know the ones that were chosen to come, and I kind of saw something in the kids’ eyes and it was like, “I know I can’t change anything and I don’t even know if I can help anyone,” but I just felt like, “let me figure a way to do something.”

So the tickets, even though it’s only a dollar, it doesn’t get commissioned, it doesn’t get taxed. Through the course of a year or the over two years that I have been doing it, it adds up. I have been able, with my ability through the organization, to give me autonomy to spend it how I like. They’ve had some recommendations and they’ve wanted to use it for different things or certain things, but for the most part I can call up a guitar company and ask for an artist rate or get a sound system and cut a deal with it. We get some guitars from this place and that place and a sound system and we will get some DJ equipment and some drum machines up there as well.

Actually 14 of the students, or 12 of the students plus two people on the staff, are coming to my DC show on April 1 and we’re paying for their travel and lodging and food to come to DC and visit the nation’s capital. I think it’s probably going to be the first time for a lot of those students ever.

Yeah, so I mean it’s like you’re just giving. It kind of allows me to be able to cater it the way I think it might have an affect on somebody. Even if it doesn’t have an affect on them, it just gives them a new experience. A lot of the kids are dealing with a lot of emotional… a history of a lot of trauma that’s been passed down from generations. There is just of lot of human spirit and a lot of goodness and humanity. They asked me to do Red Lake, which was pretty far away from any major airport or I would be there more often. But I was able to visit there and perform there and bring some guitars. I did a poetry contest because I felt like that was a good way for the students to kind of learn or be inspired to write a poem, because through the arts I think there is a kind of expression that is sometimes held deeply inside these kids that exists. I wanted to maybe figure a way to get it out there. And I feel that just putting it in front of them, hopefully some of these kids will feel they are able to express that.

Citizen Cope is performing solo acoustic shows throughout the country. You can see him April 8 at The Paramount in Huntington, NY, and April 9 at Harrah’s Atlantic City. For more information, visit citizencope.com. 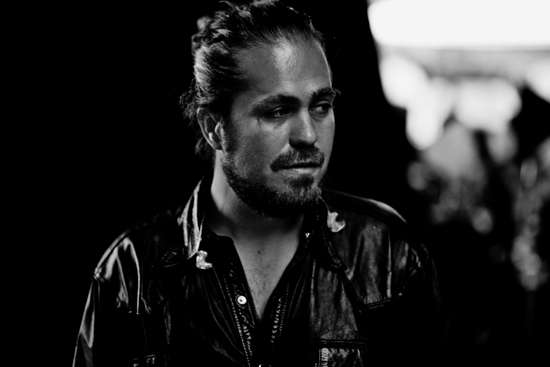