In 2006, Lights stepped onto the alternative pop-rock scene and quickly built herself an army of loyal fans. Throughout the last 11 years, the talented artist has kept fans and followers captivated with gorgeous songs, intimate lyrics, and glimpses inside her life with husband, Beau Bokan (Blessthefall), and their daughter, Rocket Wild.

After releasing Little Machines in 2014 and a follow up EP, Midnight Machines, in 2016, Lights is thrilled to release her fourth studio album, Skin and Earth, later this month. The record is a stunning celebration of resilience and multi-faceted, badass femininity.

While writing and recording her latest concept album, Lights, an artist in the truest sense of word, carefully crafted and immersed herself in a spectacular, futuristic, post-apocalyptic world. The album and exciting multi-issue comic brings fans directly inside Lights’ world for a journey of discovery, imagination and perseverance.

The 30-year-old artist carved time out from singing, writing, drawing and preparing for her upcoming tour to discuss the unique creative processes behind her exciting projects.

I listened to Skin and Earth from start to finish. It’s awesome.

Thank you! I’m glad you got a chance to listen. The release is only a few weeks away. I’m really excited!

Your fourth album is a complete concept record. You created an entire world for your album and your comic to live inside. Talk to me about developing this world?

There wasn’t really any book that told me how to do this kind of thing so it was a lot of layers. It started with the basic idea of the storyline. From there I started writing songs and divided the story into 12 parts, which were movements in the story. There are 12 songs on the record and two interludes. For each part of the story I wrote three or four songs and then narrowed them down to the best.

In total I wrote 60 songs to make sure we had the best ones in each slot. I started flushing out the story after all the songs were written and towards the end of narrowing them down. I pulled together all these resources to teach me how to panel, write comics and color. One of the books I read at the time was called, Writing For Comics by Alan Moore. I’ve learned a lot from that little book. He said, “Before you come up with a plot or even characters, create the world. Make maps. Learn everything about the world. What is the weather like? What is the government system like? What is the social structure like? Get a great understanding of your world and then pick a wormhole in time through which your story occurs and then everything falls into place.”

I did for a time put everything on hold to create this world. I made maps and created governing bodies and big companies that own everything and the way the world ended, because it is sort of post apocalyptic, and why they are still sustaining. I planned everything and then went back to finish the story.

That changed everything because the basic idea didn’t have those surroundings. It was more of a regular world experience at the very beginning. As the world developed it became this bigger thing. Suddenly this wasn’t just going to be a 20 comic or a simple love story. It was going to be something a lot crazier. When I finished flushing out the story finally I had written 150 pages in novel form and had to strip that back into storyboards for the comic. I started drawing last summer and am still drawing now. It has taken about a year and a few months already just to draw. It’s been a really amazing experience.

You totally threw yourself into this project!

That’s what was cool about the whole thing. I learned you are capable of so much if you just try. I think there’s a lot of people, and I know I have been this way in the past, that don’t end up trying things because they are afraid before even attempting it, to fail. I do that all the time. “Oh God. I would love to make a comic, but I don’t know how.” I finally put the work in and it’s been a lot of work but suddenly I have accomplished this dream. I think you can do a lot of things you didn’t think you were capable of.

You birthed an alter ego named En. How did En free you to explore and write about themes you might not have delved into as yourself?

“Savage” was the last song we put out. It’s an angry song. I have never written an angry song. Maybe it’s not the right word but I never really felt like I was allowed. As an artist when you write music it is reflective of your life, your experiences and of what people think is current. So if you write something like this people will automatically think there is something wrong with your relationship or that your marriage is falling apart. I have always felt cornered into writing things that were meant to be indicative of my life at this very time. I don’t know if that’s an expectation I put on myself or if that’s what the world thinks, but nonetheless it’s a standard that exists when I write. It’s like I have to write about my current experiences.

That’s not to say I don’t experience anger or haven’t had my heart broken. It was nice to write a song like this finally because this is something everyone experiences. I was using En’s experience in the story to channel the song. There’s another song on the record called “Fight Club.” It’s about the necessity of fighting in relationships. It became really freeing to write from an angry side or write from a darker side. “Skydiving” is about sex. Of course that’s something everyone experiences. For some reason I didn’t feel like I could sit there and write about these things without having somebody to channel through in a session, but I’m like, “This is a character. We can talk about this character and that’s what we’re going to write about today.”

It was wonderful because I was channeling her all the time and in reality she is a side of me. En is me in another dimension. She responds to things the way I respond. I wrote her to be me because I understand myself and that helped me understand her. I even started singing with a part of my voice I had never really sung with before. It was more soulful and a little more aggressive, more intentional and intimate. Suddenly, I started exploring a whole new facet of creativity.

Of all the songs on Skin and Earth, “Savage” is the one I enjoyed most. It is unbelievably relatable for everyone who has been hurt or has done some heartbreaking. I don’t know how you did it, but the song is at once vulnerable and anthemic. How were you able to marry two opposing sentiments so symbiotically?

That’s awesome to hear. I was having the discussion last night actually of what a strong woman is in a comic or a movie. Some people live by the mantra that you have to be a superhero to be a strong woman, but I don’t think that’s true. I think everybody is vulnerable and everybody has weaknesses. Everybody has moments where they look not strong, but that doesn’t mean they’re not. In this book the character has moments of weakness and sadness and neediness. Through them she learns her strengths. By the end of it she discovers her glimmer of hope in a hopeless world. I think that is a more relatable strong character than somebody who is perfect all the time and who knows what to say all the time.

You manage to be sexy without being vulgar, feminine without being girly, and strong while remaining vulnerable. When you write lyrics and develop music videos are you cognizant of your female fans? Does being a female role model factor into your creative process?

Lyrics have always been super important to me. I have been in sessions where a writer doesn’t have as much of an emphasis on lyrics and just wants it to be phonetically pleasing. That’s a different kind of songwriting. That’s valid. There are a lot of songs out there that take a phonetic phrase, put words in, and move on, but I think it’s always important to say something. I stay true to my emotions. I’m a flawed, weak person sometimes and I will write about that, but sometimes I feel strong and I will write about that. Ideally my lyrics will resonate with somebody else because I think we’re all not so different at the end of the day.

From the opening to final notes, Skin and Earth has a tremendously consistent sound. Every song clearly belongs on the same album and beautifully compliments the next. What inspired the sound of this record and how were you able to maintain consistency throughout?

It’s interesting to hear you say that. There are moments I thought the album was a little too eclectic. You take “Savage” and put it up against “Morphine,” they are two pretty different songs. The track list and the way the songs were going to roll out was predetermined. I always knew “Skydiving” was going to be the first song. There was a gap in the second song and the third song was “Savage.”

The song that came between those two had to bridge that gap sonically so I knew what it needed to sort of sound like. I knew it needed some guitar. I knew what it needed to say. I wrote a few songs for that gap before we came across “Until the Light,” which I wrote with Corin Roddick (Purity Ring). That one seemed to bridge the gap. The format of the storyline and the album helped create bridges between songs to ensure everything flowed.

You collaborated with incredible artists for Skin and Earth and are quoted as saying there was a mutual “fanship” between yourself and the other musicians. How did you decide whom to bring on?

It just kind of worked out. I’m honestly not sure how the Big Data collaboration was born but he came up into the mix and it was like, “Want to write with Alan (Wilkis) from Big Data?” I said, “Hell yeah!” I went to New York and we wrote. It was so great. We became really good friends. It was such a natural connection.

It was sort of the same with Corin. My manager worked with Purity Ring in the past and asked, “Do you want to do a session with Corin?” We got together in LA and became good friends. Josh (Dun) and I were friends before this. He said, “Do you want me to drum on the record?” I was like, “Yes!” He played on “Almost Had Me” and “Savage.” Everything felt natural. We were always together doing it all. None of the collaboration was long distance, which is rare these days.

Opening the album with “Skydiving” delivers a clear a message that this album will be a departure from your previous three. “Skydiving” boasts an unabashed free fall vibe and in a way invites listeners to embark on an unusual and totally wild journey with you.

The opening lyrics is, “It all starts here.”

The album is an experience from start to finish, not a series of 12 individual tracks.

There’s a very particular arc where it’s love and happiness and then descending into darkness and then lifting yourself out of that darkness and coming out in this wild storm which will be shown when the later comics come out. 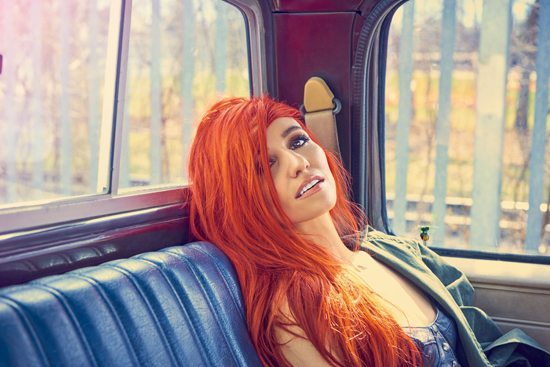