First there was Aretha. Then there was Amy. Now there is Atkins. With her rich, soulful voice, her penchant for yesteryear, and her relentless reverence for the forefathers (and foremamas) of rock, Nicole Atkins weaves her way into the hearts and guts of everyone lucky enough to watch her perform. Atkins’ spectacularly honest new album, Goodnight Rhonda Lee, pairs overwhelming raw talent with pure, can’t be contained, naked emotion. The album’s 11 songs beautifully battle complex themes of sobriety, transition, isolation and to quote the artist herself, “bad behavior.”

The best way to enjoy Atkins is live, where her booming voice and retro-inspired look combine to deliver an incredible experience reminiscent of the female powerhouses, which preceded her. Recorded live to tape in just five days with Nile City Sound, Goodnight Rhonda Lee manages to capture and deliver the spirit of Atkins’ on stage performances.

During a recent interview with The Aquarian Weekly, the Jersey girl turned Nashville resident pulled no punches while she discussed everything, from treating every performance like her last to finding freedom through sobriety.

I interview so many men. I’m stoked to chat with a woman today.

That’s how I always feel. Too many dudes!

Congratulations on Goodnight Rhonda Lee. It’s extraordinary and unlike anything anyone else is doing right now. I’m thrilled it’s on vinyl.

Me too! We needed to record this album live. I’m a live singer. I want to be present, involved, and collaborating. That’s how they used to make records. I was listening to Frank Sinatra’s Ring-a-Ding-Ding! and hearing him with the orchestra say, “Alright. Stop. Stop. Stop. The bass player fucked up.” Then he starts again and he’s like, “Now I fucked up.” It’s cool. You hear that energy on the recording. If you listen to Traffic, John Barleycorn Must Die, you hear them having fun in the studio. I wanted to put the music out but also transfer this energy that you can hear on tape. When we pressed it I sat and listened to the whole thing. It sounds so good on vinyl. It’s perfect.

Vinyl forces you to experience the album the way the artist intended for it to be heard.

Absolutely. Or if you’re lazy like me, you keep pressing “start” on Side A again and again until you really get to know a record.

That’s way too true. With many popular artists leaning heavily on Auto-Tune and overdubbing…

It’s refreshing to hear a woman open her mouth and effortlessly belt it out. How do you stay true to your acoustic aesthetic and evade pressure to incorporate the gadgets?

I have never been pushed to rely on Auto-Tune or do anything like that because I’m a singer. A lot of pop music people aren’t actual singers. They are front people. It’s just more of a style thing. I try to rest my voice as much as possible because I love cigarettes and talking. I listen to a lot of music and am continually inspired by other singers. I listen to Roy Orbison, Brenda Lee, Janis Joplin or modern singers like The Cactus Blossoms. They sound like The Everly Brothers with the most beautiful harmonies. They make me want to sing harmonies again. I hear JD McPherson, a new singer who sounds like the white Solomon Burke. When he sings he throws it out there and really goes for it.

This album is mercilessly honest. How did you find the courage to bare your soul?

A lot of the things I was writing about were things I was going through. I have always written about my experiences, but in a more abstract way because I was scared of being mean to people. Some of these songs came out in moments of pain. When I wrote “Colors” I was frustrated. I was quitting drinking and trying to get over the craving of wanting it all the time. I would be in a restaurant or watching friends play at bars and think, “Fuck man. I just want to concentrate on my friends and on making music and not look at the glowing bottles. This is so dumb.” I was sitting at the New Jersey Transit crying, “What’s wrong with me?” The song “Colors” just came out. I reached this moment of comfort with myself. Maturity maybe? I don’t know. I still feel pretty immature. If you have something to say you got to say it or it’s going to eat you up.

Unleashing the innermost mysteries of your soul can go one of two ways; you can be left feeling naked and unnerved or it can be a baptismal experience. Which way did it go for you this time around?

I think it was more like a relief. It was a relief to just admit I was fucking up or that I was sad about something. It’s OK. In the song, “A Little Crazy,” I was such a wreck over this one relationship. It wasn’t working and I would be in bars crying to whoever would listen and that’s OK. It’s embarrassing but shit fucking happens. You drink too much and you are quitting. Don’t be embarrassed. Fuck it. Lots of people do that. If you don’t talk about it you’re not going to move past it.

I called it quits on booze years ago.

When you’re a woman and you’re young and you like to be in that scene there’s a little shame that can come along with it.

There is a lot of shame. It’s a boy’s club. That all runs into part of it. When you quit drinking you find out who your real friends are. Even on your side, people you used to enjoy going to bars with, now you’re like, “Oh no. I don’t want to hang out with you. You’re really annoying!” There’s definitely a boy’s club. A guy in a group can get really drunk and no one says a word but God forbid a woman does. As women we’re judged a lot more harshly. It’s a shame but it’s the way it is. Besides that I had a depression that wasn’t going away. All the things I loved felt like they had concrete poured on them and I couldn’t access them or my creativity.

Drying out offers extreme clarity, which can be scary but so exciting.

It gives you more room in your brain. You aren’t thinking about going to a party or going out drinking. It frees up a lot of space. It’s different for everybody what that space wants. Thankfully my space just wants to make stuff. I just want to make music. If I’m not making my own music I want to help friends make their music. I just want to play.

You perform a lot of cover songs. Do you have a favorite?

Right now we’re doing a cover of “Can” by Vitamin C. It changes all the time. I actually put out a covers record a few years ago called Nicole Atkins Digs Other People’s Music.

There’s like The Mamas & the Papas and The Doors. I like covering any song I can make my own. There’s just so much music out there. It’s super fun.

I saw you years ago at Mountain Jam and fell in love with your music. It rained for almost the entire festival, but I had a blast.

My guitar player called me the morning of Mountain Jam to say she had a cold and wasn’t coming. That’s why I was playing guitar and it was super loungy. We didn’t have a full band. My husband was working for JD McPhearson and we went to the Forecastle Festival in Louisville. I thought, “Is this going to be fun? Am I going to have fun at this now that I quit drinking?” It is fun! I saw LCD Soundsystem and I could not stop dancing. I had a blister on my toe but it was just so much fun!

What’s next for Nicole? Are you doing any writing?

I am doing a lot of writing. I am writing for myself and I am producing a couple of songs for Thomas Stinson of the Replacements. That’s something that’s new to me but I am really enjoying it. I love musical projects where you are with people and you are in the moment. Sitting by yourself and working on music has its time and place but I enjoy working with other people. I am also writing with this great girl from Atlanta named Brittni Jessie. She sings backup for Leon Bridges. She is wonderful. I just feel like she is almost like Sade. I’m writing in all these different styles. Everything is going to get really busy. What I learned from touring the last record is you just have to keep writing even if you are touring. You can understand as a writer. It’s like going to the gym. It’s really hard to get back once you have been away.

It’s so true. I had a baby three months ago. It’s impossible to find time to write once you get out of the daily habit. You have to force yourself and stay disciplined.

Congrats! That’s amazing. That’s the thing too. There’s a lot of emotional pain that comes with writer’s block. Procrastination can fill you with anxiety and the only cure for that is action. You just have to hop on the horse. Write three pages of gook as soon as you wake up. It’s called a brain dump. Have a brain dump in the morning with your coffee.

As a Garden State gal I know there is power in defining yourself as a Jersey girl. Last summer I caught you with the Avett Brothers at The Stone Pony. You danced and sang like nobody’s business. It felt like I was watching you perform in your backyard.

The Summer Stage show? That was such a fun day! My dad was sick that summer (he is better now) and going through chemo. He has known the Avett Brothers since I was in college because I went to school with them so he was like, “I’m going to go out to see the show.” Playing every city is a different experience. Jersey people go hard. They are like, “Yeah motherfucker! Bring it!” New Yorkers are like, “Cool. I’m not going to dance to this, but I love it.” Nashville, it’s different. There are a lot of musicians that go to shows. It’s a big musician town.

There’s so much music history in Nashville. It must be inspiring.

There’s a lot of history. People come here from all over the world. We have friends from Canada and Spain. A lot of our friends are Southerners. We have a ton of friends from Texas now, which is great because they are the most fun people in the world. You go out with a bunch of Texans and you don’t think for a second, “I’m bored. I want to drink.” You are just like, “Oh my God. These people are intense.” My whole life I never really felt part of a community. I have always had lots of friends and different pockets of friends everywhere I have lived but here it’s like a family. I haven’t played many shows but I feel very comfortable down here. This is one of the first places I have lived where it actually feels like home. I miss the boardwalk and being able to walk everywhere. That’s a big thing for me. I need to go to Jersey or New York like every other month to get my walking fix. Down here it’s just really cool to be a part of the community of musicians. 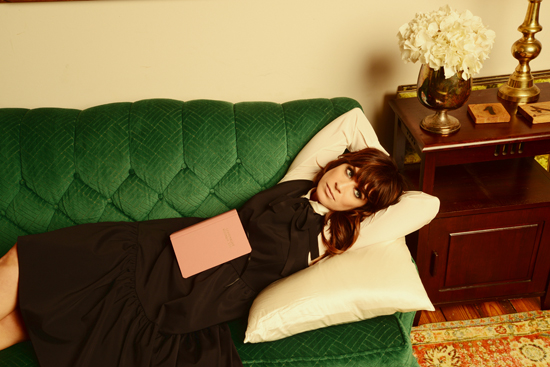