The Mowgli’s: Ain’t No Place I’d Rather Be

Katie Jayne Earl: The dynamic vocalist of The Mowgli’s on the band’s dream of helping everyone live a “Real Good Life”.

For the last six years, alternative rock band The Mowgli’s have been treating fans to upbeat, fun loving music and near non-stop electric live performances. The world was first introduced to the optimistic and incredibly energetic band back in 2012, when a successful Kickstarter campaign enabled the group to independently release their debut album, Sound the Drum.

I caught up with Earl, who offered peeks inside the band’s life on the road ,while explaining the motivation behind The Mowgli’s desire to keep creating positive, fabulously fun music.

Hey Katie! Thank you for chatting with me today. Things must be getting hectic as you gear up for the Real Good Life Tour, which is kicking off in just a few weeks.

Thank you for talking to me! We are getting ready to go on tour but I have just been watching movies and hanging out today.

In that case, I don’t mind breaking up your day! I first saw The Mowgli’s a few years ago at Brooklyn Bowl. My friends and I got to the venue embarrassingly early, but it’s a cool spot so we decided to hang at the bar.

It’s really cool. I remember the food being good.

Really good. We walked up to the bar and were relieved to see another group already there. It was you guys! We hung out and had drinks. One of the guys tried to trade shirts with my friend Kevin. We had a good time and then watched you put on a great show. Ever since then, I’ve loved your music.

Speaking of new music, your team sent me a sneak peek of your latest single “Real Good Life”.

Yes! It has a unique electronic dance vibe, which is a little outside The Mowgli’s typical style. With its fun party vibe, I can see the song turning into this year’s summer anthem. Is “Real Good Life” the start of a Mowgli’s album or can fans expect this single to stand alone?

Last year we did one tour and then took time to get back to our lives and get our house in order. Josh and I got married. In October or November we got back into writing. Josh and Colin went in to write with these writer/producer guys who are just really cool and pretty laid back. They wanted to see what would happen. There was no intention behind it other than they wanted to get back into writing for The Mowgli’s.

That song kind of just happened. The band was excited about it because it felt like it was getting back to that “feel good, just kind of make everybody have a good time and party” kind of thing. We were excited. We have been getting in the studio and trying to write and create a collection of songs. We are not holding ourselves to anything or saying, “We have to get this many songs for a record by June.” We are just going to keep writing and see how it goes and what happens.

The Mowgli’s music has maintained an upbeat and energetic vibe since the first album. When fans leave one of your shows they leave smiling. And while the message of your albums has been consistently positive, the band’s music has transformed from the first record to your new single. In what ways has the band evolved lyrically, sonically, and conceptually since Sound the Drum?

As individuals and as a group we have definitely evolved a lot — over our own personal experiences, our journey as a band, and our journey as individual musicians. Everything comes into play. A band is a lot like a marriage. You change. You’re not going to be the same people five years from now that you are today. When that time comes and you’re different you have to choose to keep working together. You have to choose to keep making music together. That’s what we have been doing.

Our music tastes change. What we are listening to, what movies we are watching, the people we are hanging out with, all of that ebbs and flows as we get older. The one thing we always try to keep consistent is that we have this platform to make people happy. In a sad world we can give somebody a little escape for three minutes and fifty seconds.

And you guys definitely do.

That was really there with us. We didn’t want to keep holding ourselves to having to sound a certain way. We thought that if we can make honest music that either makes somebody feel less alone or makes them remember they are blessed we can just stick to that. Whatever it sounds like, it sounds like. We have this really great new producer we have been working with and he has a lot to do with that too. He creates and chooses a lot of interesting and unique sounds that become such a part of the songs themselves. That has been really cool.

When you record do you go in with a set concept or message you want to convey with the album, or is the band’s process more organic with a concept emerging naturally as the album is written?

The Real Good Life Tour with Mainland is about to start. Have The Mowgli’s toured or performed with Mainland before? How did the collaboration come to be?

I have not. I actually just met them the other week, but Colin knows some of them. A good friend of ours is the drummer. We have known him for years and Colin has been writing a little with them. We have been getting to know them here in LA and it’s been cool. They are nice dudes.

The Mowgli’s have been touring machines since the birth of the band in California. How do you keep up with the demands of both the road and non-stop live performances?  I know there was one year you crossed the country three times or something ridiculous like that. How the heck do you do it?

There was actually one year Consequence of Sound came out with this “Hardest Working Bands of The Year” article. They were like, “Local Natives played this many shows and traveled this many miles this year.” We were in a 15-passenger van at the time and kept track of all of our shows. We did the math and they had flown more miles than us but we played more shows.

It’s insane. We haven’t had a year that busy since. It was a great year and we would welcome another year like that but it’s been really nice having a little bit of time over the last year. You have to get your feet back down on the ground and you have to ground yourself and humble yourself and get back to reality every once in a while, or you don’t have anything to write about or share with people.

It’s been really good, but touring is hard. I am lucky that I tour with my friends. My band is comprised of buddies of mine and not hired guns. My husband is there so that’s great, but it’s a hard and grinding lifestyle. You do a lot of work and put in a lot of hours to get you to the 75 minutes you get to be on stage. Ideally those 75 minutes are worth it. Our goal when we tour is to make that time on stage worth it for all of us who have journeyed to get to that stage and for everybody else who came out that night.

You are the only female in the band. Are there any women in the crew you can rely on when you need a serious break from the boys?

Not enough honestly! We had a female tour manager once but there should be way more women involved. I mean they are out there, just not in my particular circle, but I would welcome it. I would be so stoked to see more sound women, tour managers, and lightning directors.

Like I said, they are out there. I am not saying there are none. There are some really badass women working in music, but it’s a rarity, man. I am stoked to see it more often but I really wish I saw it more. It’s just crazy. There are so many tours we go on where literally 85 percent of the audience is women, and of all the people that walk on stage that night I will be the only woman performing. It’s just crazy to me. It makes me sad, but then we get to go on tour sometimes with MisterWives or Lights or Walk Off The Earth. There are definitely some bands that have badass girls and there are some really cool female artists out there. We just have to get them touring. We have to get them out there.

You guys are not just incredible musicians but social activists. In 2015 you supported The International Rescue Committee during your tour and released “Room For All Of Us” as a charity single. This past November proceeds from “It’s Christmas Time” again went to the IRC. How did you get involved with the IRC?

We got involved with The International Rescue Committee when the Syrian Refugee Crisis peaked a few years ago. Photos started surfacing and it became hard to ignore. Through some grapevine we heard about the IRC and how for the past hundred years they have been helping resettle refugees all around the world.

I never heard of them before getting prepared to talk to you today.

They are so fascinating. I had never heard of them until I did and then I found out that Albert Einstein actually started the IRC.

After he saw Hitler rising he reached out to different world leaders seeking their attention and saying, “We have to get these scientists, these professors, these Jewish great minds who are at risk, we have to help them.” He was underground trying to get people out of Germany. When he eventually made it to America he formed the IRC and they have been all over the globe since.

They sound incredible. Thank you for educating us about them.

It’s not much but we designed a “Real Good Life” poster, because we live a real good life and believe everybody deserves to. Proceeds from the posters are going to go directly to the IRC. If you come to a show you can directly support them through us.

That’s a great idea. Thank you so much for talking with me today. The new song is fantastic. I am excited to see you guys when you hit Brooklyn!

Thank you so much! I hope to see you at Baby’s All Right. Come grab a drink or something. It’s been almost a year since we went on our last tour and we are excited to get back out there. We are going to play a lot of our older songs because we are excited to get back in touch with the people who have been with us since the get go. If we are going to share new songs we want to share them alongside the fans who have been with us since the old songs, which we will also be playing. It’s going to be a nice collection celebrating our whole career. 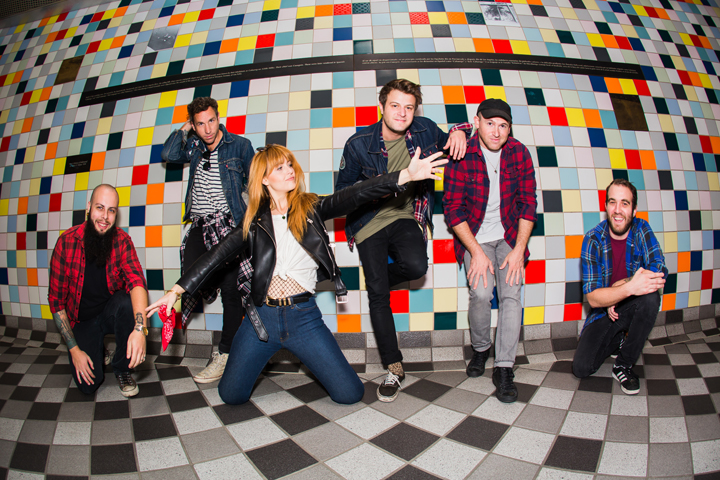