Walk The Moon: Asking The Questions

You are here:
life 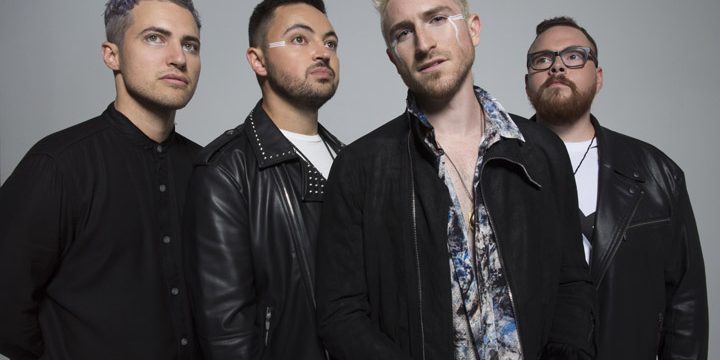 Walk The Moon: Asking The Questions

Kevin Ray: The badass bassist examines Walk The Moon’s unfiltered sound exploration on “What If Nothing”

Summer is already off to an incredible start for Walk The Moon bassist, Kevin Ray. With the continuation of the band’s Press Restart headlining tour underway, the Monolith Tour with Thirty Seconds to Mars, Joywave, and MisterWives just kicking off, and a debut acting performance under his belt, Ray certainly has a lot to be excited about.

After more than five years of near constant touring Walk The Moon — featuring Nicholas Petricca (vocals/keyboards/synthesizer), Kevin Ray (bass/vocals/guitar), Sean Waugaman (drums/vocals), and Eli Maiman (guitar/vocals) — enjoyed a deliberate break from life on the road. In October 2016, the guys reunited, this time to celebrate Kevin Ray and Megan Elizabeth Oldfather’s wedding. Before long, Walk The Moon was back in the studio writing and recording what would become What If Nothing.

I caught up with Ray, who revealed how the band shook things up during the creation of their latest album and what it was like collaborating with two stylistically unique producers for What If Nothing.

Your summer schedule is packed with dates for both the Press Restart Tour, as well as the Monolith with Thirty Seconds to Mars, Joywave, and MisterWives. Have you toured with any of these bands before?

We toured with MisterWives. They are our good buddies. We are really looking forward to that part of it for sure. We have some of the same crewmembers and we keep seeing them all the time. They are just good fun, good people.

Congratulations on your latest album! What If Nothing, released in November 2017, maintains an overarching theme of change, growth and awakening. What inspired the band to explore these concepts?

I think it just came naturally. The places we were in at the time, the changes we were going through, and a lot of unknowns. We were faced with the decision to power away, be comfortable, go home, sit and take it easy or jump into the unknown. We are so glad we did because out of it came a lot of songs that, I want to say, were very therapeutic for us to write. We talk about ourselves for a change. In the past, a lot of our music was about what was going on in the world. We tried to have a lot of answers. This time we were asking a lot of questions and that was pretty new for us.

Your wedding brought the band together after a hiatus. Did space help reinvent the voice of Walk The Moon? Was the experience working with the guys again chaotic or cathartic?

To be honest, I don’t know if it ran that deep as in to say taking the time apart changed us in any way. We just needed time to go take care of life. We had been on the road for like, five straight years at that point and had missed a lot of opportunities to catch up with family and pay bills and be regular citizens for a minute. It was nice doing that. I don’t think it changed a ton about us, but it definitely made us revaluate what we are doing it for, why we are out there, and why we dedicated so much of ourselves to it. That’s probably as deep as it goes.

Getting back together was a great time. It was great that it happened to be my wedding. That was cool. It was a good experience and everybody was in a good mood. Not to say everybody had been in a bad mood. We had a lot of stuff to work out but it was nice to get together and celebrate something.

How did the writing and recording process for this album compare to the creative experiences with previous records?

This one was longer. I think that’s the main, obvious difference. Not only had we been away for a while creating on our own and exploring, but the time it took from when we came back together to when the record was done was also a longer period of time. We spent longer diving deep into the music. We had more writing sessions, wrote with different people, and produced with different people.

The record was split up between two producers. All of us were living full time in LA at that point. In the past we spent an ungodly amount of hours in the studio all day, every single day. This time we tried to approach it more like a job. That’s the wrong word to use, but more like humanely. Not everybody had to be there 16 hours a day, seven days a week. We took weekends off and went on little trips. We tried to make it as relaxed as possible. The producers also had a great vibe and the studio was really relaxed. It was a good experience.

What was it like working with producers Mike Crossey and Mike Elizondo? How did they influence the sound and direction of the album?

The producers really become another band member when it comes to recording a Walk The Moon album. It’s very collaborative. Everybody is bouncing things off of each other. Everybody has a voice. It’s nice to have somebody to sort of steer the ship. That’s what the Mikes did.

They each bring a unique flavor. Mike Crossey is like a rock guy. He comes from a background of really eclectic rock ‘n’ roll, indie stuff, British stuff, and a lot of cool music. Mike Elizondo has a huge repertoire of cool pop, big hip-hop, and things that are different from us. It was a fun mix having a guy who was right up our alley and a guy who is coming from a different place and headspace in terms of sound and how we approach songwriting. They are both incredibly professional; incredibly smart people, very scientific about getting sounds and making cool things happen. The studios are wonderful. I think they enjoyed splitting up the record.

It’s a weird thing to say but I think they understood where we were coming from and why we went with two different people. The final product has a lot of continuity. I don’t think you can tell which songs were which producer. That’s key because we were scared of that in the past.

The entire album sounds super intentional. Each track, and the order in which you put them, truly serves the overall theme of the album. There is clear progression.

Cool. Thanks. That’s great. Half the time you think, “Oh. Yeah. That definitely tells the story. This song is perfect after this song,” and half the time you take another look at it and go, “Wow. This might be terrible. We have no idea what we are doing.” It’s nice to know the time we spent putting the songs in order was worth it.

What were you and the guys listening to during the creation of What If Nothing? Did you tap into any of the music you were immersing yourself in for inspiration?

We constantly listen to different artists and because of the span of the recording process for this album it wasn’t like we only had time to listen to a couple of artists. We had nine months or something, which is a lot of time to explore to different music. I was listening to a lot of stuff our producers made. It was a dream come true for me to work with those guys, so I was listening to The 1975. Twenty One Pilots are our buddies. I was listening to stuff Mike Elizondo had done, like all my favorite hip-hop from Dre to Eminem to 50 Cent to Snoop, and Death Row. A lot of stuff Elizondo was on was a big niche part of my life growing up. I was seriously into hip-hop. As a bass player, to sit across from the guy who played the bass lines to some of my favorite hip-hop records was a total trip. I was listening to a lot of that stuff partly because I wanted to impress him!

You can hear that influence in the music, especially in songs like “Headphones.” It sounds like the band is having a blast exploring different aspects of your sound.

It’s not so much that we weren’t exploring that stuff in the past, but this time we weren’t afraid to do it and put it on the record. We hadn’t written anything together in a while and said, “We should just get a space and write.” We rented a little studio in Austin, Texas. The four of got an Airbnb, lived together, and wrote every day for a few weeks. It was a raw, very exposed time for us where we hadn’t talked or written in a while. We just wanted to get together and let all the crap out, all the energy out. Stuff like “Headphones” came from that. Stuff like, “All I Want” and the songs with tons of energy that ask questions, that all came from a time when we really didn’t know what was going to happen.

Those are some of my favorites. What songs on What If Nothing are you most excited to play in front of an audience?

We played almost the whole album in front of an audience already. I think by far and away my favorite song to play is “Headphones.” I am a little selfish because I grew up on a lot of Nineties riff rock and that song was born out of an unabashed love for riff. It’s cool to see the audience head banging. You don’t see that a lot these days, so when we get to play rock ‘n’ roll and make the crowd jump up and down it’s pretty fun.

There is a song called, “Sound of Awakening” we haven’t touched live yet because it’s multi-part. It is going to take a lot of thought into how we perform that live because it’s very different and eclectic. It’s long and there is a lot of stuff that doesn’t just come from four dudes in a band. There is a lot of weird production on that song. I am excited take an audience on a little bit of a journey.

You recently threw your talents in a new direction. Have you always been interested in acting or is it a newfound passion?

Always. Absolutely. I have been in love with acting before I really knew what I wanted to do. Music was a hobby that turned into an incredible opportunity, but acting was something I dreamed about as a kid. I put it on the backburner because I have had such a blast with Walk The Moon. Sometimes we get a week or two here or there and maybe I can squeeze in a little TV show like I did. We will see what happens. I am just giving it a try. It doesn’t take my focus away from the band. It’s just something I have always wanted to do. Now that I have a little time why not try? After I hang up with you I am going to go back to filming a self taped audition for something. I audition constantly so let’s see what happens.